There are over 130 species of ants in Singapore as of 2018, with many coming from other regions of the planet due to increased trade.

Ants are social insects which form colonies which range in size from a couple dozen to over a million individual members. Most ant colonies possess a hierarchical structure where every individual possesses a job. It’s not uncommon for these pests to be divided between the queen, soldiers, and drones. Ants are true insects with three body segments: the head, abdomen, and thorax. They also possess six legs and identifiable antennae on their heads.

Ants are well-known for their division of labor and ability to solve complex problems. When they enter a property, it can be hard for the owners to kill them. Many species of these pests leave hormone trails so ants know where to go to find food. They can also identify unsafe spaces based on where the trails end. The older, more experienced drones will also train their younger counterparts how to find food and will lead them to resources through a process called tandem running.

In Singapore, it’s not uncommon to suffer an ant infestation due to the climate and number of species which frequently plague urban areas.

The 4 Most Common Singapore Ants 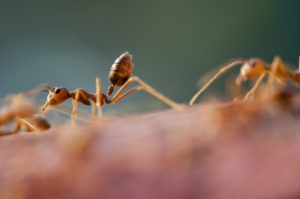 The four types of ants which homeowners in Singapore need to worry about are the ghost, pharaoh, carpenter, and crazy varieties. All of these pests will enter properties in search of food and resources. They might also find buildings attractive because they provide shelter from cooler weather and natural predators. When dealing with an infestation, people are most likely to encounter a colony of ghost ants.

Ghost ants are also called sugar ants and favor moist environments. They are commonly found in kitchens in places like under the sink, in cabinets, or behind appliances like the refrigerator. This type favors sweet and sugary foods which possess the carbohydrates ghost ants need for their colonies and survival. Ghost ants are roughly 1.3 to 1.5 mm. long and are characterized by their dark heads and translucent bodies.

Pharaoh ants are difficult for property owners to handle. These pests do not react well to pesticides. When sprayed, the ants will break up their colony and scatter to new locations, making them difficult to eliminate. Pharaoh ants will also bite when they feel threatened. They are 2 mm. long and feature queens who can live between 4 and 12 years. Each ant is recognizable because of its distinctive golden or yellow-brown color. They are nocturnal and like to eat oily or protein-rich food and will live anywhere that they can form a colony.

Carpenter ants derived their name from their habit of living in wooden structures and trees. They do not eat wood but will carve out an area for a colony with their mouths. Because of this trait, they are frequently mistaken for termites. Carpenter ants can be large, measuring up to 15 or 17 mm. in size. They are typically black and reddish-brown and enjoy eating honeydew and dead insects. Because they are attracted to moisture, people will find them in bathrooms, kitchens, and other frequently damp areas.

Finally, there are crazy ants. Crazy ants have long legs and are typically black or dark red in color. Their name comes from one of their defensive techniques. When the colony is disturbed, they will scatter in all directions, making them difficult to kill. They can be 2 to 3 mm. in length and have long legs and antennae which give them a distinctive appearance. Crazy ants feed on all types of food but prefer sugary materials, so they will frequently live in the same region as ghost ants.

Signs of an Ant Infestation and Prevention 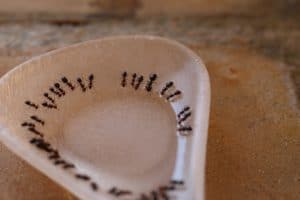 It can be difficult to tell if ants are on a property. The easiest ways to tell are to locate an ant nest near your home, usually made of dirt, or to see a live ant as it searches for food. The best method of handling ants is to prevent an infestation before it begins. Because they are attracted to buildings because of food, it’s important to clean up spills, crumbs, and messes.

All food packages should be kept sealed and excessive moisture should be wiped up. It’s also crucial to ensure ants do not have a way of entering a building. Sealing cracks around doorways, windows, and in the walls can close off potential entryways and keeping buildings safe from this pervasive pest.